About the event series:  Sources of inspiration that move both art and science forward often emerge from an intricate dance in a liminal space where curiosity and intuition overlap with materialization and substantiation. This series of events highlights that dance, exploring what’s possible through musical and scientific imagining, to produce productive, self-reflexive, creative practices. George A. Miller Visiting Professor David Rosenboom’s paradigm propositional music will serve as a focus to draw together practitioners at UIUC from music composition and performance, computer music and instrument design, biochemistry, neuroscience, electrical and computer engineering, history, new media art and design, and more, to explore building models of possible worlds in a critical technical practice of art-science convergence.

A keynote speech by Rosenboom begins this profoundly interdisciplinary event series, Neuromusic—propositions from an art-science convergence, followed by a panel discussion. Guest lectures and interactive discussions with Rosenboom will ensue in the School of Music’s Composers’ Forum, Experimental Music Studios’ Forum, and Introduction to Computer Music class (School of Information Science.) In between, Rosenboom will participate in a recital/workshop and performance/master class with participants in the Electric Strings Program and join in an Improvisors’ Exchange Workshop. A collaborative session about sonification of data, Mapping Numbers to Sound—From Scientific Exploration to Immersive Musical Experience, will demonstrate ways to translate data from protein folding experiments into sound and the concept listening as performance, in which data from analyzing resonant features in brain signals are mapped onto sounds to create self-organizing musical forms. Another interdisciplinary session, Music in Vitro—playing with living neuron cultures, will explore linking signals from UIUC’s Mind in Vitro project in a feedback loop with a computer music instrument. Rosenboom will speak in a special commemorative event highlighting the pioneering work of UIUC composer Salvatore Martirano and his legendary electronic instrument, the SalMar Construction. In a culminating concert, Propositional Music of David Rosenboom, Rosenboom will perform a wide-ranging selection of his compositions, including a recent brainwave music piece, works employing a Yamaha Disklavier computer-interfaced piano, and other pieces in collaboration with performers from UIUC.


BIO: David Rosenboom is a post-genre composer-performer-interdisciplinary artist, whose work highlights solo to large-scale emergent musical forms, multi-cultural collaborations, interactive technologies, artscience, neuromusic, and more. He studied in the stimulating environment of late 1960s UIUC, which led to an unbounded journey exploring new ideas through music. He has held important positions in multiple institutions, including York University, Mills College Center for Contemporary Music, and others; he now holds the Roy E. Disney Family Chair in Musical Composition in the Herb Alpert School of Music at California Institute of the Arts, where he was also Dean from 1990 through 2020; his work is widely presented, recorded, and published internationally, including major retrospectives at Whitney Museum of American Art, Centre Pompidou-Metz, and Tokyo Opera City. Rosenboom was named a Yamaha Artist in 2012. 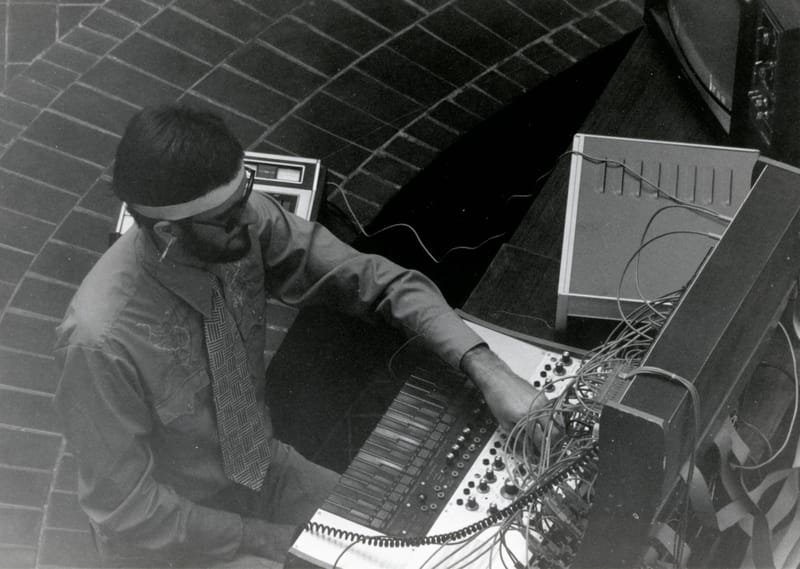 In conjunction with the innovative Mind in Vitro - Computing with Living Neurons group at UIUC, David Rosenboom and Mattia Gazzola will lead a real-time brainstorming workshop and demonstration to envision a potential longer-term collaboration in neuromusic cybernetics. The workshop will examine possibilities of directly linking the electrical activity sensed in living neuron cultures with a computer music instrument that, in turn, may generate acoustic vibration stimuli for the neurons to react to, creating a new kind of performative biofeedback system. Speculations on how a biosemiotics approach might be helpful in interpreting both the behaviors of neuron cultures and musical results may be explored, along with a quick survey of historical work in biofeedback and the arts leading up to this new possibility. Interactive discussion with colleagues and attendees will be welcome. 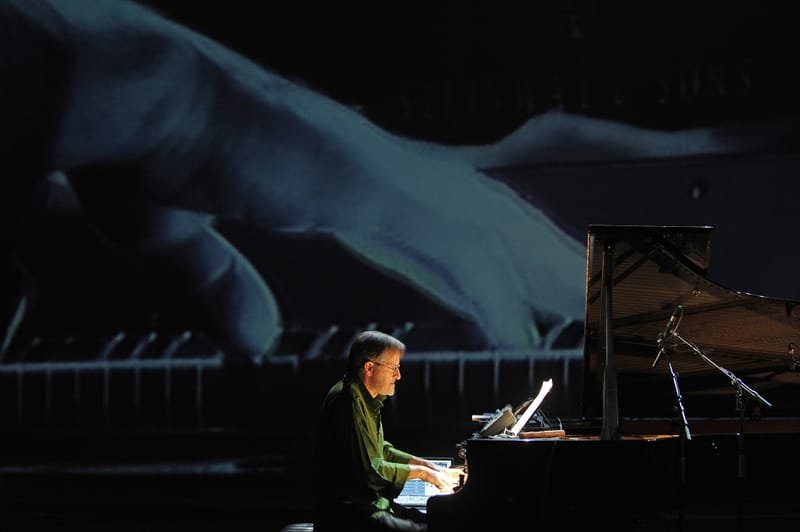 An audience is invited to experience a composing and performing practice in which music emerges from a process of making propositions and building musical models. To begin, a brass quintet and actor perform a piece about the nature of change. A sonorous sonic journey follows with 3D diffusion of resonances in an electronic tapestry emerging as two active imaginative listeners perform with their EEGs in one of Rosenboom’s seminal brainwave music pieces. An adaptive musical form arises from the concept of listening as performance, and Rosenboom joins with his e-vioviola to form a biocybernetic trio shaping the structure of the musical output. Next, Rosenboom performs several solo compositions embodying his model-building practice using a Yamaha Disklavier* computer-interfaced piano, interactive software instruments, and modular electronics, often inspired by poetic philosophic musings about human conditions, our Earth, qualities of stability and instability, and evolution. A collaborative work interlacing renowned filmmaker Lewis Klahr’s uniquely idiosyncratic filmic style with Rosenboom’s live soundtrack composition explores the intersections of memory and history with reflections on uncertainty. To conclude, composer Stephen Taylor conducts a brass quintet with electric rhythm section and singer-speaker in a piece resulting from imparting the approach of proposition-making in the performance of an epic art manifesto with socio-political references. Immersive, interactive video projections designed by Ben Grosser accompany some of the music, responding directly to audio features in the live sound performances. 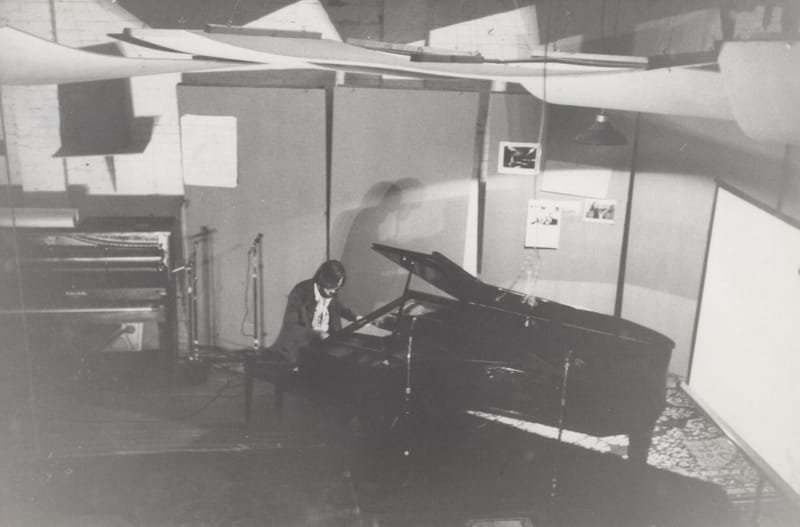 Giving a lecture for the Composer's Forum (School of Music) David Rosenboom will discuss a selection of his scored works in depth to illustrate some of the technical details in his compositional methods and sources of inspiration. These may include: musical configuration spaces that map adjacent and contingent possibilities for performances, systems for transformation musical shapes with measured similarity and dissimilarity among elements, notation as interface, emergent forms inspired by models of evolution, multiple independent times, collaborative strategies, and other concepts as circumstances suggest. Both recent works and relatively historical ones will be included. Interactive discussion is encouraged. 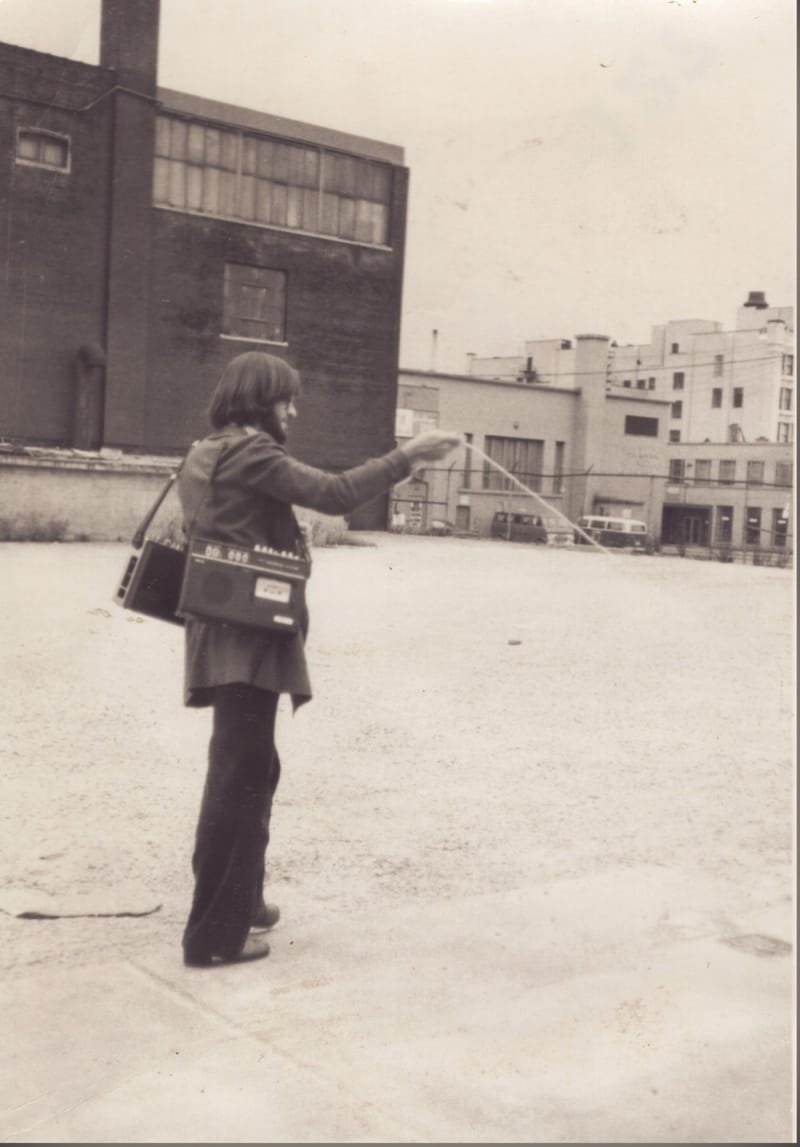 Along with a series of demonstrations in perceptualizing data from nature for scientific and artistic purposes, David Rosenboom, Martin Gruebele, and Carla Scaletti will discuss mapping data to sound for applications ranging from scientific data sonification to interactive data sonification, to interactive musical performance making use of data. Scaletti and Gruebele will describe how proteins fold and how sonification can highlight aspects of protein folding that are difficult to visualize. Scaletti will demonstrate an interactive user interface that allows the environment of a protein (for example, temperature) to be tuned, so that one can hear and see, via sonification and visualization, how real-time interaction with data provides insights into a scientific problem like protein folding. Finally, the theme of real-time interaction with data will move from its application in scientific analysis to its application in musical composition and performance. Rosenboom will show how data extracted from the electroencephalograms of individuals engaged in what he calls listening as performance are mapped inside the interactive instruments used in his most recent brainwave music pieces. In one work, Ringing Minds, this includes mapping data from multivariate principal oscillation pattern analysis, auditory event related potentials, and other measures from several brains linked in a kind of “hyper-brain” onto an array of complex resonators inside in a computer music instrument. The event will conclude with a discussion among the presenters and attendees. 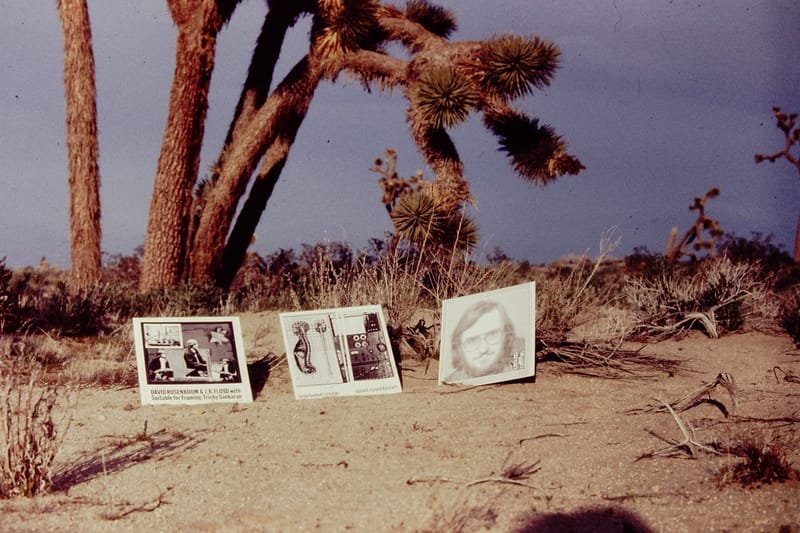 During the two-week-long residency at the University of Illinois Urbana-Champaign (Oct. 3-14), David Rosenboom will give an on-air interview for a radio program of Jason Finkelman, coordinator of the Center for World Music at the University of Illinois and radio host at WEFT Champaign 90.1FM. Accompanied by selections from Rosenboom’s recordings, the conversation will focus on the concept of propositional music, featuring such themes as the use of brainwaves for live performance, improvisation, sound design, performance tools, and more. Tune in on October 9th at 8 pm: http://new.weft.org 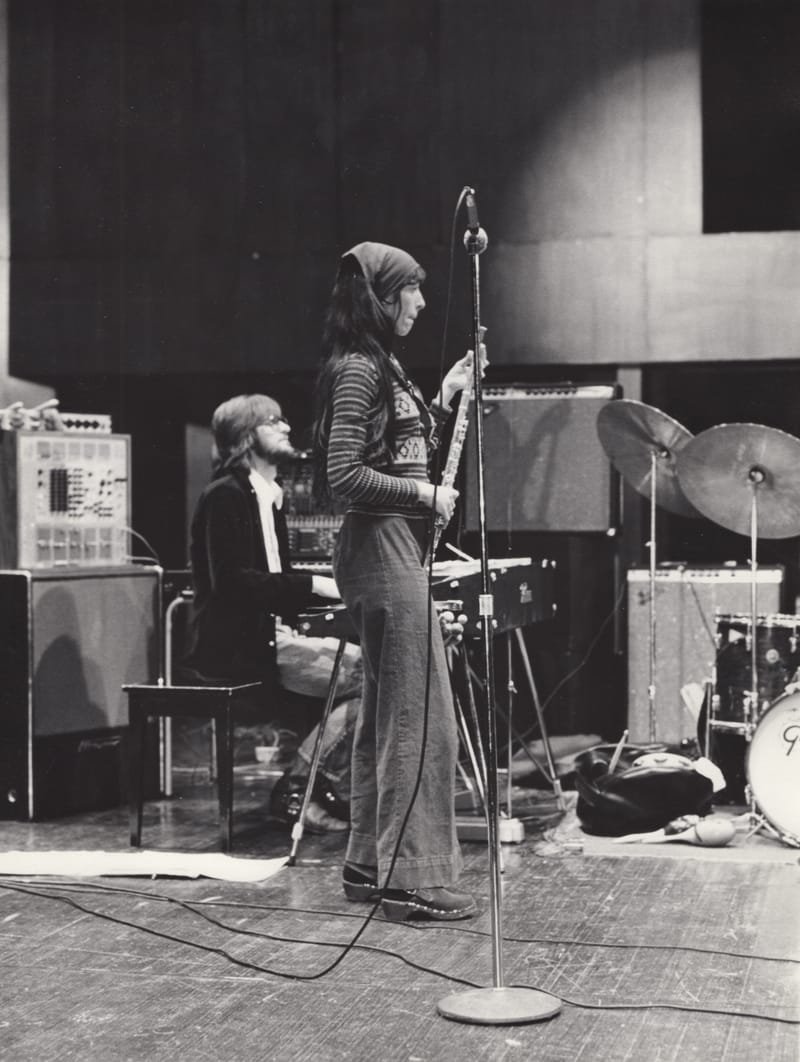 Choose Your Universe—composing your improvisation practice 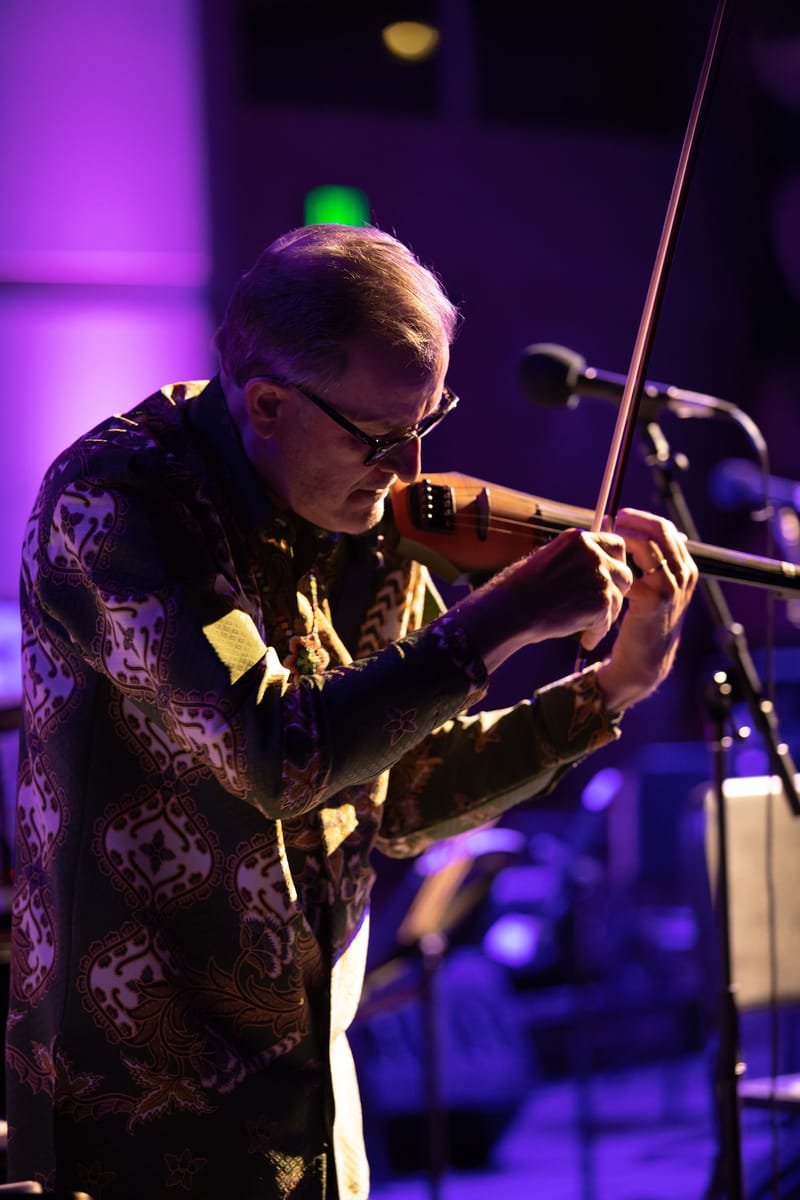 The program for this event will unfold in three parts: (i) performances of original works by participants in the Electric Strings program along with commentary by David Rosenboom in a master class setting, (ii) performance by Rosenboom of a solo composition for wireless, five-string, e-vioviola and modular electronics, and (iii) structured group improvisation performance lead by Rosenboom in collaboration with the program’s participants. 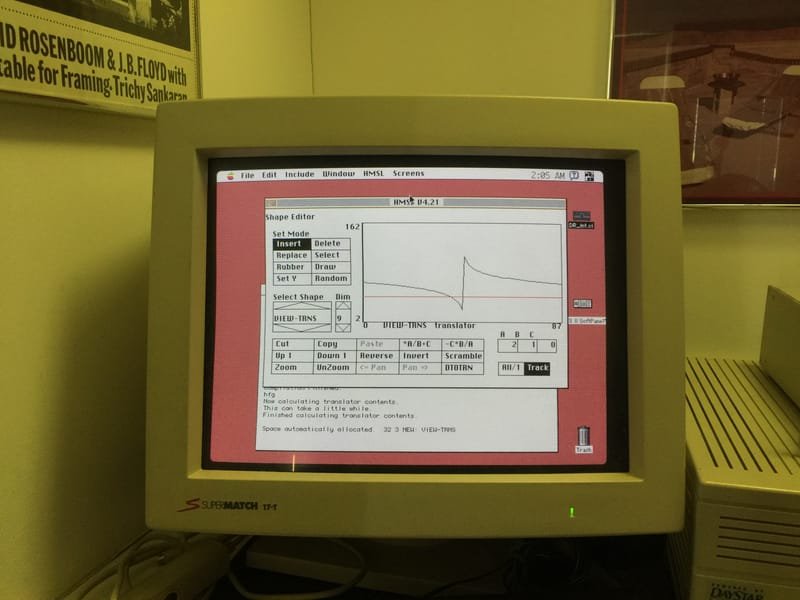 In a guest lecture for the iSchool the course "Introduction to Computer Music,” David Rosenboom will focus on ideas that have informed his use of computer music software tools designed to bring algorithmic music composition methods into real-time performance. An influential historical tool, Hierarchical Music Specification Language (HMSL), developed by Phil Burk, Larry Polansky, and David Rosenboom in the 1980s will serve as a launching pad for discussion, from which Rosenboom will expand into a landscape of related tools developed since that time, illustrated with examples of his music. Speculations about future developments will ensue, and interactive discussion is encouraged. Together with program director Rudolf Haken, students in the Electric Strings program will demonstrate a diverse array of original creative works for the audience and for David Rosenboom. Rosenboom will respond to the students’ work and will also discuss his approach to playing a modular electronic instrument with his wireless, five-string, e-vioviola as its primary input. This will include discussing general design concepts for developing practical instrument interfaces with electronics, employing techniques like spectral parsing, multi-band envelope following and threshold triggering, interactive control function generation, and shaping and morphing sampled waveforms as primary sound sources within a small modular setup activated by the e-vioviola. Techniques for improvising with this setup may be explored. The participants will then design the program for a performance to take place later in the week. 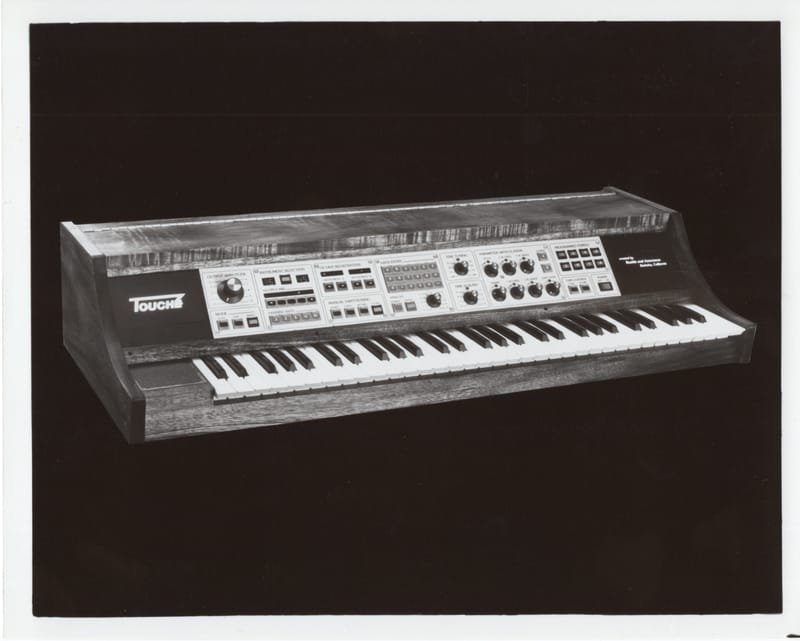 David Rosenboom will discuss concepts that have informed his work in electronic music systems development over several decades, especially those that emphasize blending performance with composition. Highlighted among them will be the early digital keyboard instrument, Touché, developed in collaboration with Donald Buchla in 1979-1980, and a recent digital simulation and expansion, called Touché II, which Rosenboom will use in performance during his residency at UIUC. Other current and historical examples of systems developed for selected compositions will also be shown. Interactive discussion is encouraged. 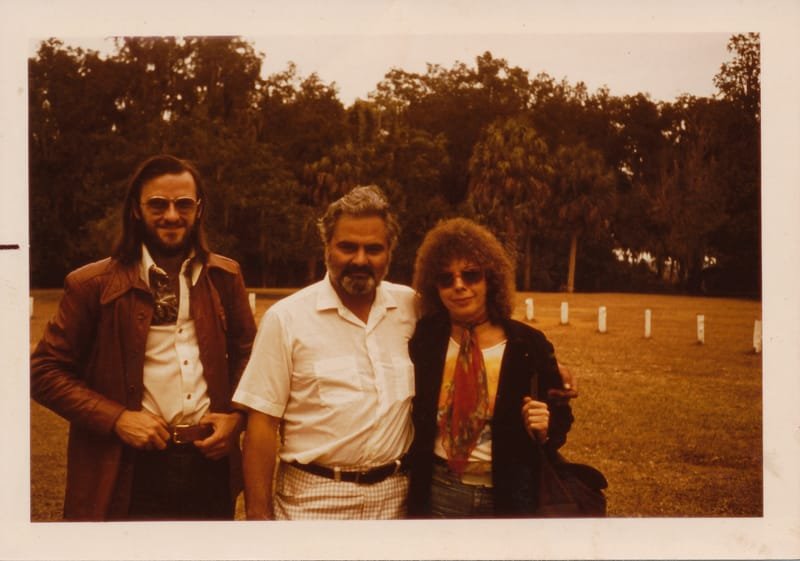 The first “interactive composing machine” from the University of Illinois: appraisal of multi-faceted compositional legacy of Salvatore Martirano

In this event, the legendary SalMar Construction will be demonstrated and situated at the center of a discussion led by David Rosenboom about the uniqueness of this electronic instrument and how Salvatore Martirano’s composing practices influenced a generation of practitioners in experimental music. The compositional frameworks employed in some of Martirano’s related earlier and later works will also be explored, along with examples of his approaches to improvisation and collaboration. 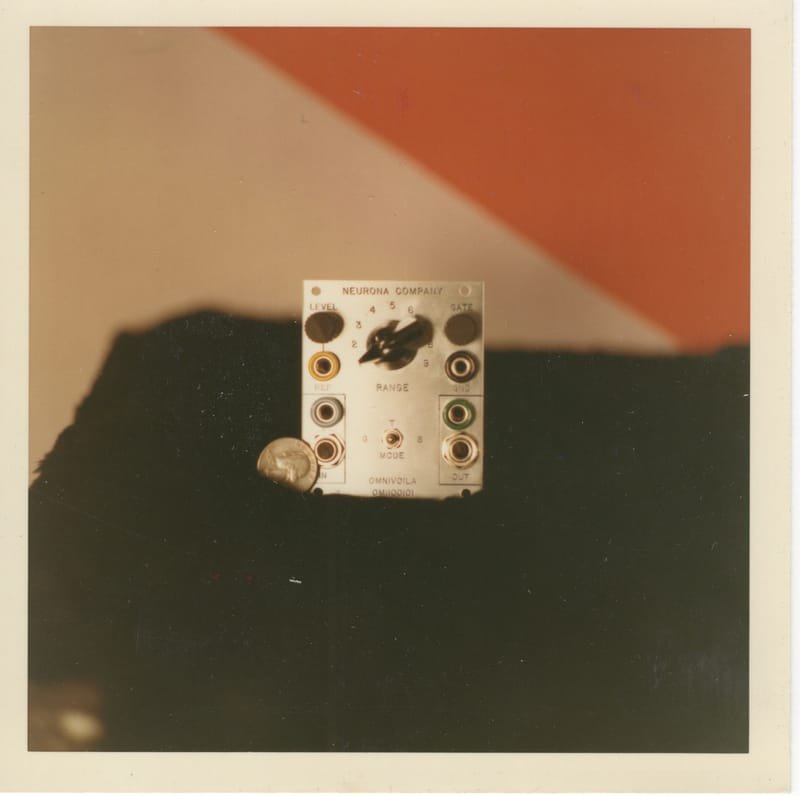 What is form? What is an instrument? Is time granular and emergent? How do hyper-brain ensembles perform? Questions like these are being explored in experimental music. In this talk, David Rosenboom will present concrete examples from his more than five decades of pioneering work in propositional music illustrating how testable theoretical models in science and process-based what-if models in speculative arts can converge to mutual advantage in the new artscience: musical forms that arise spontaneously and evolve, listening as performance, networked telematic projects, large-scale collaborative forms, new approaches to notation, adaptive engineering in interactive instruments, cybernetic compositions employing direct musical interface with the human brain, and more.

assistant professor, Department of Mechanical Science and Engineering; co-director of Mind in Vitro

professor of New Media, School of Art and Design; dean of the College of Fine and Applied Arts

research assistant professor at the Department of Chemistry

assistant professor, director of the Siebel Center for Design

composer-performer, doctoral student at University of Illinois School of Music